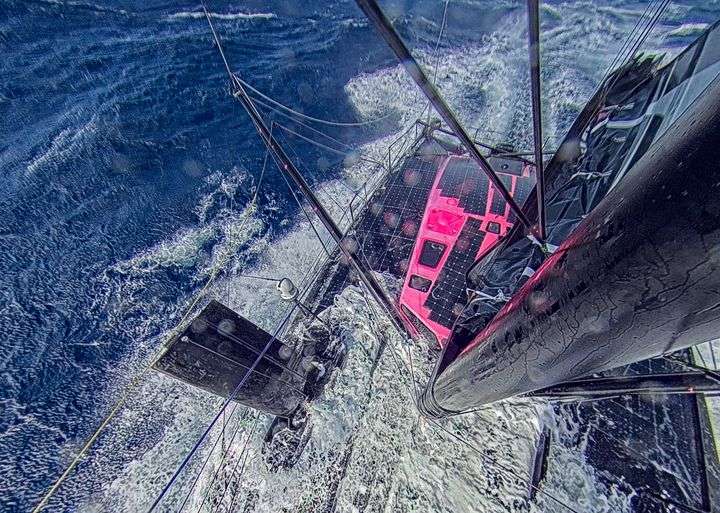 To contextualise the race, if you’ve ever done any round-the-cans yacht racing, just under seven days into the Vendee Globe and the lead boats have just rounded the ‘windward’ (first) mark. Stage one of the race saw some tricky conditions, both tactically and weather-wise.

So far, the lead non-foiling boats have managed to keep pace at the front of the fleet. Not needing to sail deeper wind angles has enabled them to take a more direct line and stick closer to the rhumb line, shortening the distance they’ve had to sail to get to this point.

Then of course, there was storm Theta, a deep depression that tracked East through the fleet over the last few days, 50 to 60knots of wind and 6 – 7m waves. Each skipper applied different tactics to navigate the storm, some ensuring the stayed well clear, some, including Alex Thompson, chose to get as close to the centre as possible. A slightly high-risk approach, it did mean more pressure and faster sailing but came at the expense of harder work, more sail changes and a knockdown which could have caused considerable damage. Fortunately for the brit, the mighty HUGO BOSS seems to have got through unscathed and marches on southward.

This balance of risk-taking & boat speed is a prominent feature of this race. One of the hardest challenges on the planet, just getting around the course is tough enough, but Alex is in it to win it and will likely have to make similar decisions over the next 60 or so days.

For now, at least, having pushed hard to ensure he is at the front of the fleet, the Brit is onto the next leg of the race, more favourable for the faster downwind foilers and should see them pulling away from the others.

The next challenge for the leaders will be the doldrums, lack of wind rather than too much. Successfully navigating through this will mark the second leg of the race, the first gybe-mark to retain the round-the-cans analogy.

At least for now, the more settled trade winds, fast and relatively flat conditions will allow skippers to get some well earned rest.